The Crane and the Snake!

The Crane and the Snake!

Tai Chi was developed in China in the 13th century by the mythical Daoist sage Chang San-Feng. Legend has it that he retired to the Wudang Mountain to meditate. The inspiration for Tai Chi came when he apparently had a dream where he saw a fight between a crane and a snake. He observed the graceful movements of the crane as it flapped its wings, deflecting the snake’s strike while the snake was so supple it slithered out of harm’s way as the crane attacked with its beak. The result was that neither animal was injured in the encounter.

So Tai Chi was created as a system of exercises for health and self-defence. It is a soft or ‘internal’ martial art, which relies on skill and wisdom rather than the hard or ‘external’ martial arts which focus on developing speed and strength. It works the mind and the body and teaches us how to be relaxed in challenging situations rather than be tense and confrontational. This makes it a very safe exercise suitable for all ages, especially for older adults who want a gentle exercise which is both interesting and enjoyable.

“My balance has definitely improved.” “I always have the best[...] 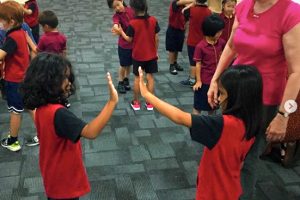 Tai Chi is great for kids! Here I am teaching[...]